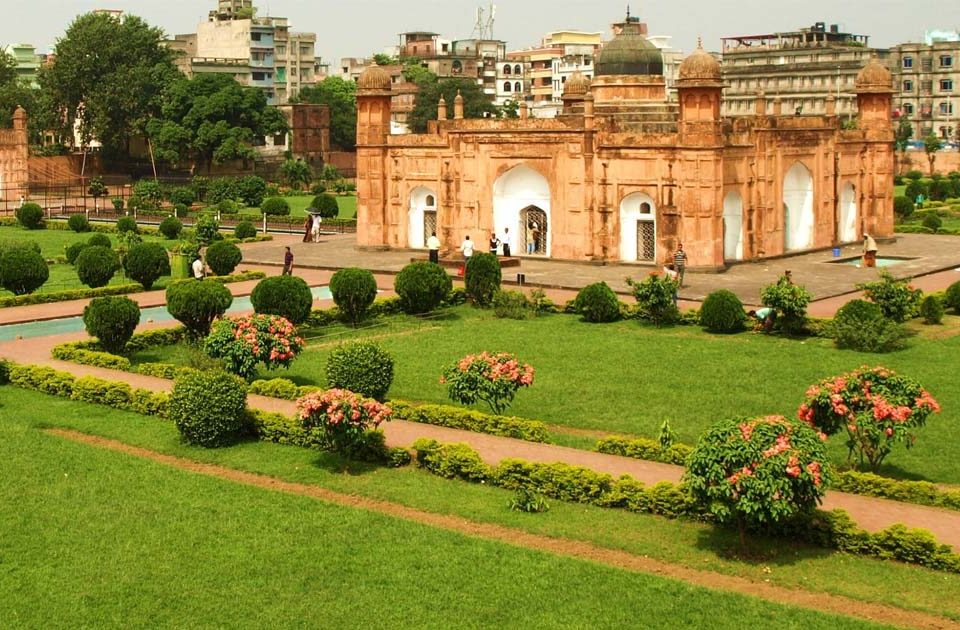 Lalbagh Fort or Fort Aurangabad, an incomplete Mughal palace fortress at Dhaka on the river Buriganga in the southwestern part of the old city. The river has now gone further south and flows at quite a distance from the fort. D’Oily’s painting (1809-11) shows that more than half of this east-west oblong fortress touched the water of the river on its south and southwestern sides.

The construction of the fort was commenced in 1678 AD by prince MUHAMMAD AZAM during his 15 month long vice-royalty of Bengal, but before he could complete the work he was recalled by AURANGZEB. His successor, SHAISTA KHAN did not continue the work, though he stayed in Dhaka up to 1688. His daughter BIBI PARI (Lady Fairy) died here in 1684 and this led him to consider the fort to be ominous.

The Lalbagh fort has three main edifices apart from the fort itself. It has a three domes mosque at the western side, and a Hammam Khana at the eastern side. Middle of these two it has a tomb (of Pori Bibi). This tomb was built using rich materials (considering that time) like marble stone, black basalt, etc. At the center chamber of this square shaped complex the beloved daughter.

There is a mosque inside the fort.
The mosque is publicly open for the public to practice their daily prayer. And the Hammam Khana is serving as a museum which exhibits the used materials like knifes, dress, guns from that time hter of Shayesta Khan was buried.

Lalbagh fort has three main facades and only one is open these days. These gates are at the northern side of the fort. At southern side it has several high walls which were the part of the main fortification.

There is a secret tunnel in Lalbagh fort. But public entry is forbidden. Because, If any one enters into it, He/Sha can’t return anyway. In British period (When British ruled subcontinent), An investigation team wanted to know the end of this passageway. They sent some chained dogs into the tunnel. After a few minutes they pulled chain and found only the chain. No dogs were found. After it, The British govt. sent some elephants but none of them never returned. After these incidents, This tunnel was sealed by the British govt.