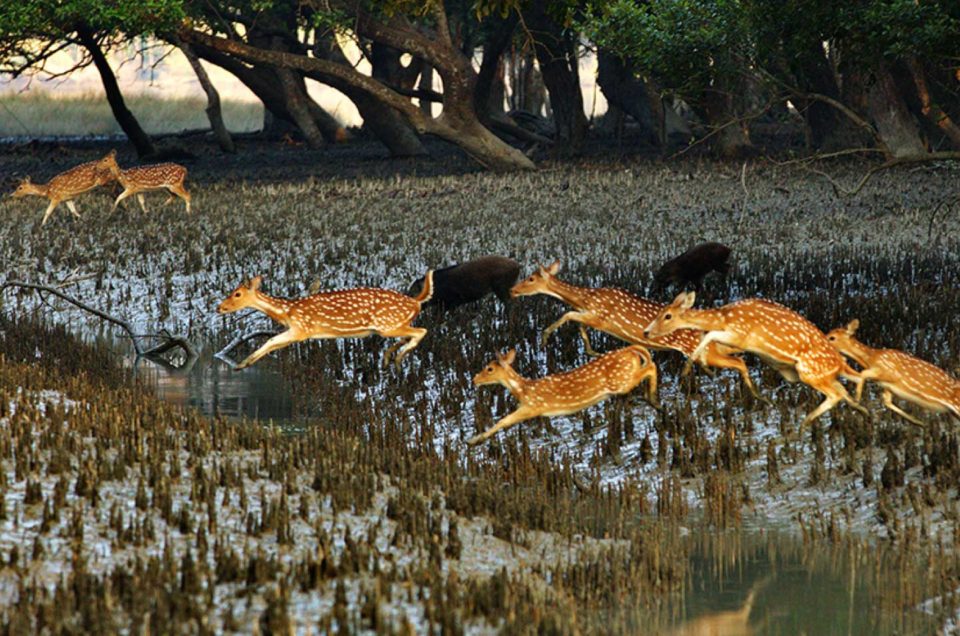 Sundarban is another world’s natural wonder which
is situated at the coastal area of BAY OF BENGAL.
This is a vast and wide forest. It is located in delta
region of the Ganges, Meghna and Brahmaputra
river basins, Khulna, Satkhira and Bagerhat districts
of Bangladesh and two districts of West Bengal,
India, spread across North 24 Parganas and South
24 Pargana. It is considered as the largest
integrated mangrove forest located in coastal area. It
has grown up in a total area
of 10,000 suare kilometers of which 6,017 sqm is
within BANGLADESH and rest of the forest is in
INDIA. IN 1997 it was announced as UNESCO
WORLD HERITAGE SITE. This is a great
achievement for BANGLADESH. There are nets of
small marine streams, mud, flatters and small –scale
archipelago around SUNDARBAN . 1,874 square
kilometers is 31.1 percent of the whole forest area
that includes riverine, inlet, bill and water area.
The main attraction of this forest is ROYAL
BENGAL TIGER. Every year numerous tourists
come to visit this world heritage site. By visiting this
forest our guests achieve great pleasure and
knoweledge from nature .

NAMING OF SUNDARBAN :
In Bengali SUNDARBAN means beautiful forest. The
name probably comes from the tree called
SHUNDORI means beautiful. This plant grows in
huge number in this forest land.
The hardwoods found from this are used to make
various items including boats, furniture. The
Sundarban is divided into rivers, canals, and inlet all
over, some of which are used for the movement of
both steamers and local boats, for communication
between Calcutta and Brahmaputra Basin.
HISTORY :
During MUGHAL period (1203-1538)a local king
took the lease of SUNDARBAN. EAST INDIA
COMPANY created the map of this forest in 1757
after gaining rights from ALAMGIR , THE Mughal
Emperor. In 1860,when Bangla Prodesh forest
section was founded, the forest area came under
organizational management.
In 1828 the British government acquired the title of
Sundarbans. L. T. Hughes conducted the first survey
of the Sundarbans in 1829. In 1830, Dampier and
Hughes, the two surveys officers set the northern

boundary of the Delta region of the Sundarbans. The
name of this line is Dampier-Hajes Line.

The legal rights of the first forest management
department were established on Sundarbans in
1869. A large part of the Sundarbans was declared
as reserved forest in 1875-76. Within the next year,
the remaining part is also recognized for the reserve
forest. This resulted in the control of forest
department under the control of the remote civil
administration.
Later, in 1879, forest department was established as
the administrative unit for forest management, with
its headquarters in Khulna. For the Sundarbans,
during the 1893-98 period, the first forest
management plan was made.

The breath-taking fairs in the watershed of the
Sundarbans
In the year 1911, the Sundarbans were termed as
waste land, which was never surveyed and no
longer came under the census.

Besides, there are bees and they make their home
in the trees of the forest. In the month of Chaitra-
Baishakh, the honey-collectors (&#39;mouals&#39;) of the
Sundarbans, enter the deep forest to collect honey
to lead their livelihood.

Plants of Sundarbans are so beautiful and they are
named beautifully ; such as gerua, guna, sundari,
goalpatha, keora, Dhondal, bine, Kadra, Vrha,
Amur, Hado, Bellasundari, Ghele, Baakjaka etc.
Besides, weeds and various types of banyans are
found in horn like vadal, onion, calyx, hinge,
gooseberry, hogala etc. They have formed
mangrove forests together. Their breathing has been
created due to inefficiency of the saline soil.

ROYAL BENGAL TIGER:
Royal Bengal Tiger or Panthera tigris or Panthera
tigris bengalensis, is a special tributary of tigers.
Royal Bengal Tiger is generally seen in India and
Bangladesh. These species of tigers are also found
in Nepal, Bhutan, Myanmar and South Tibetan
areas. Among the tiger subspecies, the number of
Bengal Tigers is the highest. According to the
National Tiger Reserve Authority of India, the current
number of Bengal Tiger in India is 1,411.
This species is preserved in accordance with
Schedule-1 of Bangladesh&#39;s Wildlife (Conservation
and Safety) Act of 2012. Traditionally it is believed
that Bengal Tiger is the second largest subspecies
after the Siberian Tiger. Bengal Tiger sub-species P.
tigris tigris National animal of Bangladesh. On the
other hand species of the species Panthera tigris
National animal of India.
TOURIST SPOTS of SUNDARBAN :

There are many tourist spots and picnic spots in
sundarban excluding the mangrove forest. These
places can give the same pleasure and enjoyment
as the forest. Some important tourist spots are given
below.
Sundarban National Park
Sajnekhali Tourist Lodge
Kaikhali Picnic Spot
Dublar Char Island
Kotka beach
Hiron point
Karamjal

HOW TO GO :
From Dhaka you may take air, bus, or steamer to
reach Khulna. Air would be more comfortable. From
MONGLA or KHULNA water vehichles are the only
medium to reach Sundarban.
You need the permission of Divisional Forest Officer
(DFO) to visit the forest.